How You Can Help

The St. Edward State Park Environmental Education and Research Center (EERC) will host the first of three public meetings on Wednesday, January 23 from 7:00 to 9:00 p.m. at Husky Hall, room 1160 (10909 NE 185th St, Bothell, WA 98011). This meeting is designed to introduce the EERC to neighboring communities and collect public input around planning for the new learning center. Community members are invited to be a part of planning and visioning for the St Edwards EERC.

The St. Edward State Park EERC is regional environmental research and education hub that will provide field learning and environmental research opportunities to preK-12 students, local colleges, neighboring communities and park visitors from around the state. The EERC will be housed in space developed in partnership with Daniels Real Estate, LLC as part of its renovation of the St Edward Seminary complex. In addition to more than 1,200 square feet of classroom and meeting space, the learning center will use the diverse habitats of St Edward State Park as a living laboratory and outdoor classroom.

As a park-based learning center, the EERC has the opportunity to provide environmental education to local students from a wide range of backgrounds, research and mentorship for undergraduate and graduate studies, faculty lectures, community-led habitat restoration, and more.

The St. Edward State Park EERC planning process is a joint project of Washington State Parks and the University of Washington-Bothell. For more information, visit https://www.uwb.edu/research/facilities/st-edward.

Opportunities for public comment will be available at the meeting; public comment also may be provided electronically via the SESP-EERC web site. This is the first of three meetings that will be held from January to April 2019, as the planning process unfolds. For more information, contact StEdwards@uw.edu.

St. Edward is the among the most heavily used of Washington’s state parks. Its forested hills, undeveloped shoreline, streams and wetlands are home to bats, owls, woodpeckers, and other wildlife. Its trails attract walkers, trail runners and mountain bike users year-round.

The former St. Edward Seminary, now listed on the National Registry of Historic Places, is currently under renovation by Daniels Real Estate, LLC, a private development firm specializing in historic preservation. The building will open as an 82-room lodge in 2020, with a portion of the complex repurposed to house the St Edward Environment and Education Research Center. 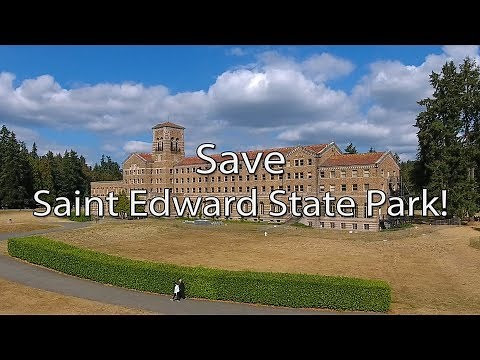 Save St Ed ball field from becoming a Sports Complex

They are taking public comments regarding the City of Kenmore proposal for the conversion (destruction) of the grassy field at St. Edward State Park.

Comments are due no later than 5:00 pm on Friday.

Here’s a “formula” for a quick and simple email:

Message: As a resident of (your city), I object to the drastic changes proposed by the City of Kenmore to the ballfield in this state park.

Your Name and Address

Please put that sentence “in your own words”…and feel free to add more if you are so moved! : )

In a nutshell, the current proposal will change the ambiance of this natural park feature into a SPORTS COMPLEX and will:

destroy 90% of the wetland buffer

Not only will this result in destruction of this portion of the Biodiversity Corridor, but it will give the City of Kenmore control over the use of the field. (Hint: STAY OUT.)

It is primarily for the convenience of a TINY percent of Kenmore residents, namely a couple hundred Little League players. (Note: a PRIVATE organization.)

It is especially important if you DO NOT LIVE IN KENMORE, that the commissioners hear from you! This is YOUR STATE PARK, not a city park.

Follow this link to the City of Kenmore web site and find the council members' email addresses as shown below:

To all who value and enjoy St. Edward State Park: I write to alert you.

The City of Kenmore is relentlessly pushing a $4.91-million proposal to “improve” the open and natural grass ball field by installing “a fenced synthetic turf field, a subsurface stormwater system, and other related structures,” like bleachers, backstops, dugouts, a perimeter walking path, field lighting, maintenance shed and added parking — not to mention more asphalt, vehicles, congestion and noise.

“Approximately 131,000 square feet of sod will be removed. A 6-inch thick layer of free-draining aggregate will be placed over the subgrade, which will be covered with a 6-inch thick plastic grating system …..”

Adjacent to the field is a Class 2 wetland, which the state rating system defines as “difficult, though not impossible, to replace, and provides high levels of some functions.” Class 2 wetland buffers must be 100 feet, but “approximately 42,717 square feet (90%) of wetland buffer area is expected to be impacted,” a euphemism for uprooting the living soil and replacing it with dead plastic. To jump this hurdle of “insufficient” buffer, Kenmore is applying for a critical area variance,which if granted, would allow the proposal to move ahead.

Kenmore promises “compensatory mitigation” and “enhancement” of the area, yet concludes “the project will result in permanent unavoidable impacts to a wetland buffer area.”

This proposal is not a “renovation” or an “improvement.” It is a transformation — destructive to what is now a living ecosystem. It would benefit a minority of users when thousands of people come here every year to absorb and enjoy a place set apart from the beginning to preserve and protect a natural sanctuary.

Youth fields are important, but this development belongs in a municipal or school setting. We cheered our son’s soccer team wherever they played, often in school fields. Why isn’t this a pursued option now?

In 2008 the Washington State Parks Commission rejected a previous Kenmore ballfield proposal for St. Edward State Park as “inappropriate.” It still is.

If this development concerns you, please call or write. Public comment period for the Critical Area Variance is Aug. 18 through Sept. 8.

Find my RSVP for Event Name

We have email-ed you a confirmation to

Change my RSVP
{"codes":{"err":"Required fields missing","err2":"Invalid email address","err3":"Please select RSVP option","err4":"Could not update RSVP, please contact us.","err5":"Could not find RSVP, please try again.","err6":"Invalid Validation code.","err7":"Could not create a RSVP please try later.","err8":"You can only RSVP once for this event.","err9":"Your party size exceed available space.","err10":"Your party size exceed allowed space per RSVP.","succ":"Thank you for submitting your rsvp","succ_n":"Sorry to hear you are not going to make it to our event.","succ_m":"Thank you for updating your rsvp","succ_c":"Great! we found your RSVP!"}}